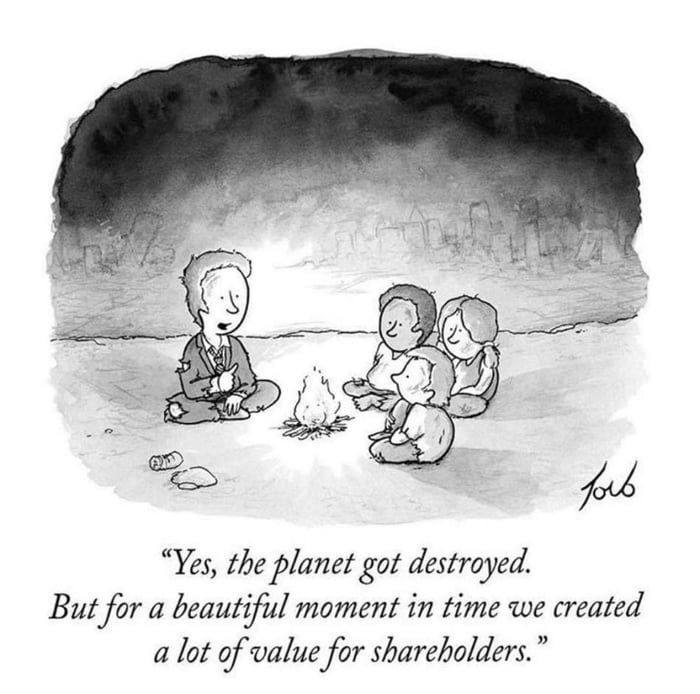 – What’s the goal of business?
– To maximize shareholder value!

I bet you’ve heard that before. I recently heard it during a strategy talk in a room filled with all kind of senior managers and execs. They all nodded in agreement, while I sat there thinking “Damn. I don’t even know what the goal of business is, how am I a founder?!” 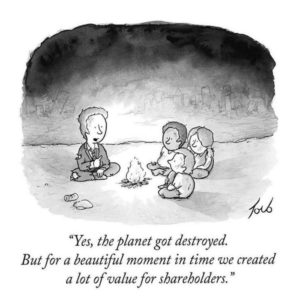 Roughly speaking, the notion of maximizing shareholder value as an ideology in corporate governance originates in neoclassical economics with the idea that, the most important economic actors are shareholders because they are the only ones taking risks. Or something along those lines. This ideology has been on the rise since the 70s when Milton Friedman pretty much said that everyone in business should do what the shareholders want, which is – more money.

I think my first exposure to this idea in its practical application was when I began trading stocks: all I really cared about was profit. In fact, I was so against fundamentals, that I traded purely on technical analysis, sometimes not knowing anything about the company other than its ticker sign. It was not until this lecture, and probably because I didn’t respond to the question in a heartbeat that I took a bit of interest in the topic and what it actually meant.

The most apparent outcome of the maximizing shareholder value ideology is the financialization of the economy, which refers to the increase of the importance finance plays in a country’s industry when compared to everything else. For example, the US financial sector’s contribution to GDP grew from 10% in 1970 to over 20% in 2010. While that alone does not necessarily mean bad news, the underlying principle is what lead to the creation of fictitious wealth and the consequent collapse of the financial system in 2008.

What’s more important, I believe, is that the above brought a fundamental shift in managerial thinking and resource allocation behavior. The US and UK – two of the world’s most industrialized nations, have changed the focus from making money out of making things (i.e. solving real problems), to making money out of money. And that would’ve been fine if at least part of the money they made somehow ended up being used for solving real issues – after all, weren’t financial markets supposed to serve as a way for businesses to raise cash?
Right.

The best example of the above is the phenomenon of stock buybacks, which is essentially a short-term manipulation of the share price, among other things. Moreover, anyone with basic accounting literacy will identify the stock buyback as the easiest way of increasing earnings per share: decrease the number of shares outstanding and EPS goes up – just in time for the earnings announcement. Other ratios also become more appealing.

In 2014, S&P 500 companies spent nearly a trillion – $914 billion – on share buybacks. This accounted for 95% of their earnings. Think about that. What impact would that money have, had it been spent on people development and innovation? On trying to find solutions to real problems and invest in the future. Instead, executives and managers – compensated based on the share price – have naturally become short-sighted, ensuring their own survival. Imagine a CEO walking into a board meeting announcing that she has decided to burn several billion dollars over the next 2 years trying to educate 500,000 sub-Saharan teenagers how to code. What do you think would happen?
Exactly.

Tech is no exception

The glorified tech industry is no exception. Apple, Microsoft, Google, Cisco, Oracle… nearly all of these tech giants are just sitting on piles of cash. At the end of 2017-Q4 Apple had $285bn in cash, Microsoft – $146bn, Google – $101bn, Cisco and Oracle – $71bn each. Back in 2012, Peter Thiel told Eric Schmidt that Google was no longer a tech company because it simply piles up cash and hopes that no one will come up with a better search technology, instead of investing in innovation. Four years later, Google has allegedly spent about 16% of its revenues on RnD. In comparison, Microsoft and Apple spent 12.3% and 11% respectively, while the German car manufacturer Volkswagen’s spending on RnD was nearly that of Google’s at 15.8%.

The way I see it is that maximizing shareholder value in today’s world is understood as a measure of a company’s success based on the extent to which it makes its shareholders rich. I’m not denying that wealth is ultimately what investors and many founders are after, but I also think that startups, by virtue of their very own existence end up creating it by not directly concentrating on it.

By definition, the focus of every startup should be to come up with a scalable solution for a big enough problem with a large number of people willing to pay to have it solved. That in itself constitutes a business case. Note that the underlying assumption here is that by creating value for the customer first, we will eventually and hopefully create value for the shareholders (read investors, founders, advisors, etc) at some point in the undefined feature. Sure, there’s an argument to be made that startups, depending on their stage, may or may not be regarded as businesses in the complete sense of the word, but I think that is somewhat irrelevant, considering that the world is in constant flux and the environment is more or less the same for everyone.

Therefore, in the startup world, shareholder value is not dismissed but it’s pushed to the background because its that much more obvious to see that it’s an output metric, a lagging indicator and it would be ridiculous to even speak of it at that stage. Instead, founders concentrate on understanding market problems, speaking to their customers, building something of value, iterating and experimenting.

On the flip side, imagine founders and investors creating ventures and pushing for immediate profitability over growth. But founders, and I also dare to believe early investors’ motivation is different: they know that the more value the company brings to the customer, the more the equity appreciates over time. From a financial perspective, shareholder value is basically the present value of anticipated future cash flows, discounted at a rate that represents the risk associated with the venture. If that’s true, then it would be safe to assume that as a company matures, its appetite for risk declines. Maybe that’s why so many founders who have grown their companies to hundreds of millions and billion dollar valuations end up leaving and starting something else or become investors. Why? I believe it is because their motivation is different – they want to solve problems, take immense risks and have a shot at making an impact… and maybe that somehow balances things out.