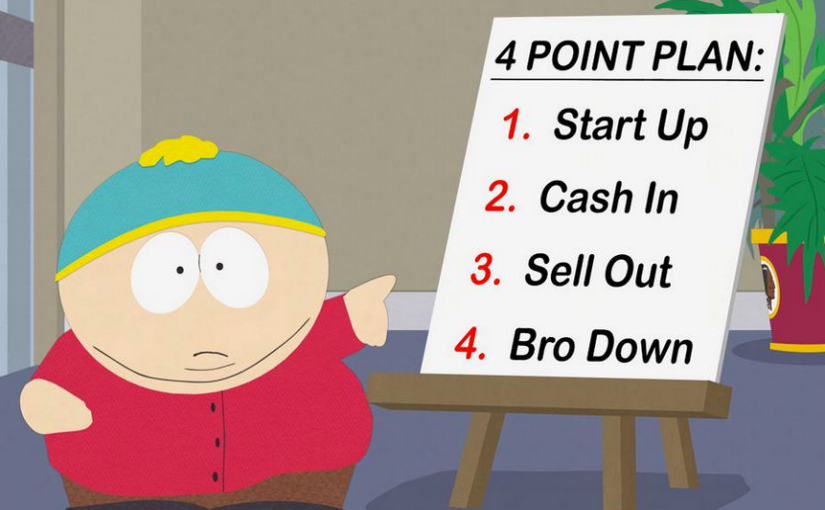 I’ll continue using the hypothetical messaging app from my previous post on retention. Let’s also assume that I’ve been working on it for over a year, so I have enough data to calculate my monthly retention rate, which looks like this:

As you can see in the table above, I’m also doing a pretty good job with my marketing initiatives and I’ve managed to deliver a consistent 10% growth in new users each month – m0 I acquired 2,000 new users, m1 – 2,200, etc. With this information at hand, I can then calculate my Monthly Active Users (MAU) and for the purpose of this example, I’ll consider m0 as the start, so MAU in m0 = 0.

To calculate MAU in m4, for example, I’d need to take the sum of all users who were retained (i.e. active) in m4 from the previous cohorts – i.e. New users in m0, m1 and m3 – and the newly acquired users in m4. I can repeat this process and get the MAU for each month.

Monthly Active Users is an indicator that a certain number of users continue to engage with your product on a monthly basis. The definition of what constitutes an “active” user will naturally vary depending on the product, industry, the stage you’re in, etc. – but it’s a good idea to pick a meaningful action. For instance, if we’re working on a messaging app, a MAU could mean any  user who meets the following criteria

We can be much more specific, but the point is to provide enough characteristics to be sure that we’re looking at users who are using the product as intended – to send/receive messages and communicate. By way of contrast, if we were to define our active users as anyone who opened the app at least once in the past month, we’ll be less accurate – opening the app doesn’t mean that these users are experiencing its value – i.e. communicating. Analogically, we can calculate daily, weekly, monthly active users – whatever makes sense for our product and goals.

Founders are really good at cherry picking the information that looks most exciting and throwing it on a deck – I doubt this comes as a surprise to any investor. If our messaging app – or any startup with similar traction – was to go ahead and try to raise money, you’re guaranteed to see the graphs below on a deck: 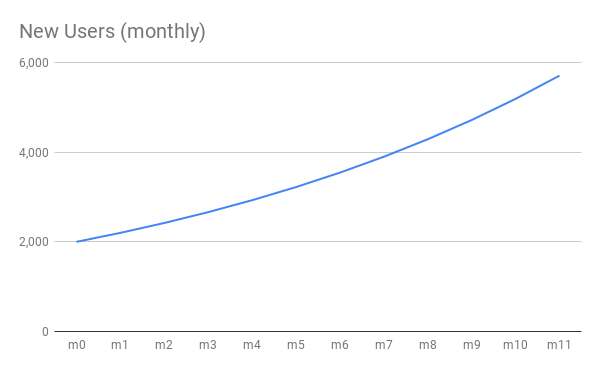 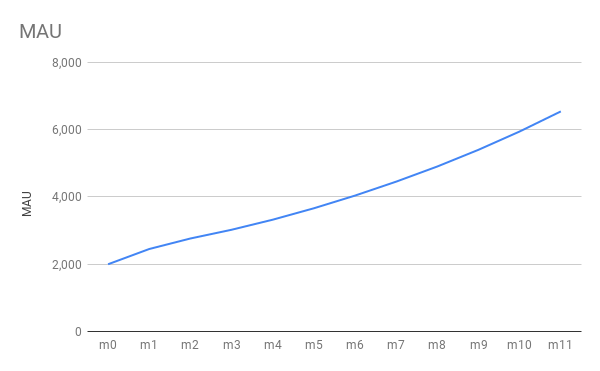 At first sight, these graphs convey a compelling story: average of 11% MoM growth in MAU, steady 10% MoM growth in new users and everything is trending in the right direction.

Let’s also add revenue and say that we charge $4.99 per month, per user – not surprisingly, things continue to look good as the number of MAU grows and revenue follows. 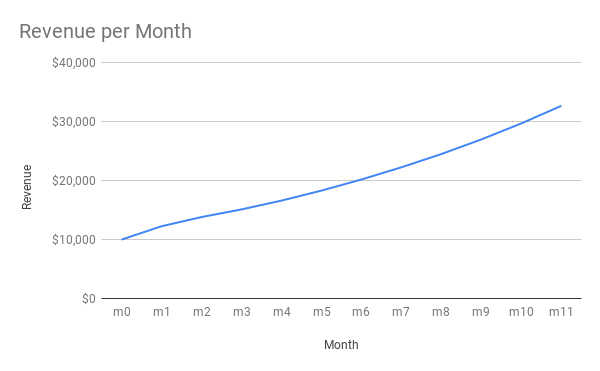 Normally, all customers have either a direct or an indirect cost of acquisition assigned to them. Occasionally, you may come across a company which has gotten solid coverage in media organically and/or has been featured by a brand or an influencer with a lot of reach, which also drives a lot of new customers, but these are much more the exception than the rule. In this example, let’s say that because our app has no brand equity at this stage, very little organic traffic and no virality, we’re mostly relying on direct customer acquisition via paid traffic from Facebook and Google’s advertising platforms. Let’s say that it costs us $0.50 to acquire a signup (of course, we’ll throw that in the deck as well) and we convert 2.5% of signups into paying users, which would mean that our cost to acquire a paying user is $20, which isn’t crazy expensive for D2C these days, by the way. 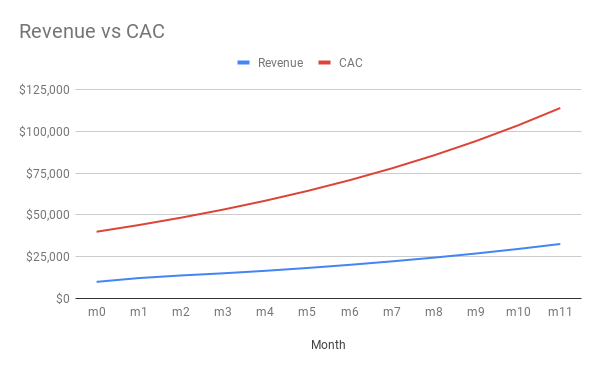 Now this changes the picture quite a bit – by month 6, we’ve spent $379,487 on customer acquisition and generated only $106,163 in revenue, or a -257% Return On Ad Spend (ROAS). This is not to say that this business is necessarily dead and not worth pursuing, but it does raise a lot of questions. One argument could be that the time to return is above 6 months and that we should take that into consideration, which is perfectly valid.

Instead of bundling all together, we can look at the revenue generated from one cohort – say m0:

At this point a lot of founders will claim that they’re chasing growth over profitability, and while this is a perfectly sound strategy for many companies, an intellectually honest founder ought to ask themselves if they’re aware of these mechanics and if this is really a strategic choice or the result of poor management. If it is the former, then some important follow up questions would be: what needs to happen in order to hit profitability and how realistic is it? Can we charge 5x more? Can we cut our CAC by 50%? Will critical mass or virality kick in at some point and cut our CAC by 2, 3 or 10x? What point is this?

There are many reasons why founders may choose to maintain the above status quo, like raising more money at a higher valuation in subsequent rounds, or perhaps there’s a potential acquirer who’s only interested in the total number of users, etc.

If we look at the results from the above example, by month 11 we’ve spent over $855K to generate $244K in revenue. Working backwards and assuming that the goal here is to build a company with a great product, is it even worth acquiring customers at this stage or could that money be spent elsewhere?

One of the first things to note here is that our retention is very low for an app, which under normal circumstances ought to be used daily – to communicate. If we compare ourselves to other apps in the messaging category, it’s pretty evident that we’re lagging behind: 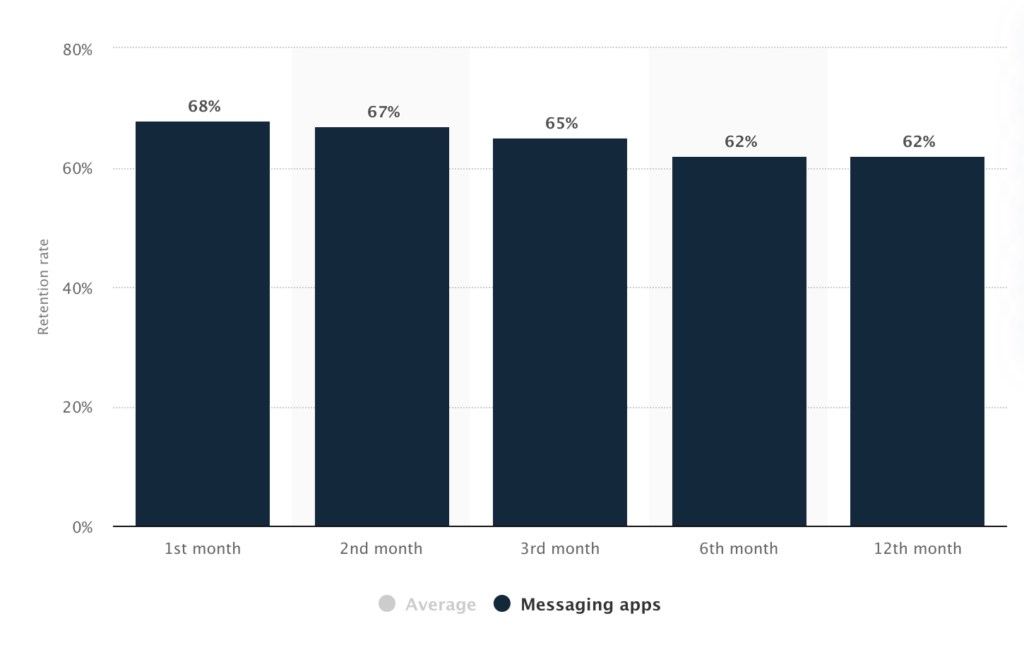 Hence, the first thing to do would be to investigate why is retention so low when compared to other apps in our category. It doesn’t necessarily mean that we’ve failed – perhaps we’re not communicating the value correctly, or we’re acquiring the wrong users, or there’s something wrong with onboarding, or the product is broken and messages aren’t being delivered/sent, etc. What it does mean, however, is that we’ve not hit Product Market Fit and we’re not ready for growing more users.

It is very difficult to dramatically improve retention, but it is arguably the better way to spend even just half of the money here (i.e. $400K) on more user research, improving the product, rather than acquiring users who don’t stick. It’s an incredibly simple proposition, yet too many of us are guilty of indulging our desire to see top-line growth at the expense of some core product metrics. Even if we did a very average job, spent $400K and after a year our app was only half as good in terms of retention than some of our competitors, this would have an incredible impact:

After a year with improved retention metrics, we’re looking at a total of $368K in revenue generated on a $457K spend versus the previous $244K in revenue on a $855K spend. We’ve also managed to deliver nearly the same number of MAU on half of the ad spent: by m11, the old version had 6.5K MAU while the new one has 6.4K.

While this product may still not be ready for growth, shifting the focus from top-line metrics like number of new users/revenue to improving the quality of the product and retention, paid off and is worth pursuing further. My point here isn’t to oversimplify the difficulty and the impact of improving retention, but rather understand the impact of ignoring it and allocating resources towards ill-understood “growth”.